The suspension of revelations for a time was perhaps the hardest thing on the soul of Prophet Muhammad (pbuh), unequalled by any other trial he (pbuh) faced while conveying the Message of His Lord, and made worse still by the gloating of Quraish: “The Lord of Muhammad has forsaken him!” And their insults: “O Muhammad! I hope that your Satan has finally left you.”1

In the face of conspiracies and harm poured down on the Call and the preacher of the Call by disbelieving tyrants and reluctant souls, communion with Allah Almighty sustained the Messenger (pbuh) along the arduous path.

With the suspension of revelations this provision stopped, the gushing spring withheld, and his heart felt a strong longing, left lonely on the path with no supplies.

This was an unbearable experience.

A flood of love and mercy was then revealed, consoling, comforting, assuring, and giving hope:

(By the morning brightness. And (by) the night when it covers with darkness. Your Lord has neither forsaken nor hated you. And indeed the hereafter is better for you than the present (life of this world). And verily, your Lord will give you (all good) so that you shall be well-pleased.)

This was all purely for Muhammad (pbuh), for his tired soul, his worried mind, and his pained heart. Your Lord has never forsaken you as they claimed, and never will. He Almighty never hated you or deprived you of His Mercy, Protection, and Refuge, past or present. Remember:

He is (Your Lord) and Protector forever. The ever-gushing spring of His Bounties never receded and more is in store for you that shall make you well-pleased… success, removal of obstacles, prevalence of your faith, and triumph of truth. These, the thoughts of your mind and the desires of your heart, while facing disbelief, obduracy, persecution, intrigue, and gloating mockery… (Verily, your Lord will give you (all good) so that you shall be well-pleased.)2 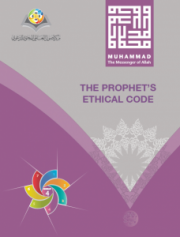 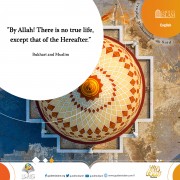 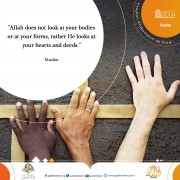 Allah does not look at your appearance