Even if we accept evolution as a process, the idea that life evolved merely as a series of random events is difficult to accept as a reasonable explanation. Even the most basic human cell is much more complicated than a mobile phone! At least the theory of evolution attempts to offer some explanation of how this might have happened, but the idea that the universe is a product of some random events has no comparable explanation, and the laws, systems and forms that shape the universe are actually much more complex than those that govern biological life!

Let’s take the example of our earth and solar system. The earth rotates on its axis once every twenty-four hours. Imagine the earth was spinning really slowly. A day or night is say 30 or 40 years long instead of 24 hours. One part of the earth’s surface would be exposed to sunlight for that time, and the other in darkness. So the earth’s surface would be both super heated and super cooled. Or, if we were fractionally (in cosmological terms) closer to the sun or further away, it would be too hot or too cold. Or, if the composition of the gases in the atmosphere was not exactly the right blend of oxygen, carbon dioxide and nitrogen , or if there was no ozone to filter out the harmful effects of the sun’s radiation, it is difficult to see how life could exist without these optimal conditions. 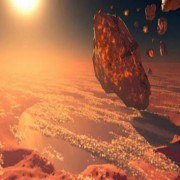 The Man in the Red underpants Chapter 02