Allah is Simply the Name of the God of Abraham, Moses, and Jesus in Arabic

MISCONCEPTION: One of the greatest misconceptions about Islam is regarding the Arabic term for God. Some non-Muslims assume that ‘Allah’ is a God other than the God of Judaism or Christianity.

We believe in God,And what has been sent down to us,And what has been revealed to Abraham and IshmaelAnd Isaac and Jacob and their offspring,And what was given to Moses and to JesusAnd to all the other prophets by the Lord.We make no distinction among them.

FACT: Arab Jews and 12 million Arab Christians use the word ‘Allah’ to refer to God. The Arabic Bible refers to God as ‘Allah.’ Two quotes from the Arabic Bible:

Genesis 1:1 “In the beginning Allah created the heavens and the earth.”

Matthew 19:17‘And he (Jesus) said to him, “Why do you ask me about what is good? No one is good but One, that is, Allah. But if you want to enter into life, keep the commandments.”

God has No Sons, Children, or Wife

2- God is the Supreme Lord

Is He not closer than the vein of your neck?You need not raise your voice,For He knows the secret whisper,And what is yet more hidden. . .He knows what is in the land and in the sea;No leaf falls but He knows it;Nor is there a grain in the darkness under the earth,Nor a thing, green or dry, but it is recorded.”

3- Only God must be worshipped

Jesus repeated the same message when he said, "The first of all the commandments is, ‘Hear, O Israel; the Lord our God is one Lord.’" (Bible, Mark 12:29)

Muhammad  said some 600 years after Jesus,

And your God is One God: there is no god but He

FACT: A person becomes a Muslim by testifying to God’s right to worship. All one has to do is say the words La ila-ha il-Allah wa Muhammad ar-Rasul-Allah (No one has the right to be worshipped except Allah and Muhammad  is the prophet of Allah).

4- We know God by His Most Beautiful Names and Attributes

We know God by His Names and Attributes that describe Him. We know God through His majestic Self-description and through the Prophet Muhammad’s descriptions that he received through divine revelation.

FACT: More than 99 beautiful names and many more attributes are found in the Quran and the teachings of His Prophet Muhammad .

And the Most Beautiful Names belong to God, so call on Him by them.

An Attribute of God:

Beautiful Prayer of Forgiveness From the Prophet Muhammad :

O Allah, You are my Lord, there is none worthy of worship except You. You created me and I am Your slave. I adhere to Your covenant and to Your promise as much as I am able to. I seek protection with You from the evil of what I have done. I admit to You your blessings on me and I admit to my sins. So forgive me, for there is no one who can forgive sins except You. 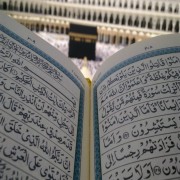