During the time when black people were treated as slaves in Europe and America, studies, which claimed to be scientific, were published.

They were undertaken by scientists who tried to show that black people belonged to a sub-human race and that they were closer to animals than to humans. This was an attempt under what is called “Pseudoscience”. Are you aware that nowadays a similar type of pseudoscience is widespread?

In 1993, Dean Hamer published a study that claimed to identify a relationship between gene Xq28 and homosexuality. Since then millions of dollars were spent in attempt to prove the claim, and after 25 years of trials, results are zero.

On the contrary, genetics came to deny any existence of any genes related to behavioral traits.

Robert Spitzer is one of the most important figures in the field of psychiatry. He played a leading role in removing homosexuality from the list of psychological disorders. Spitzer subsequently published a study showing that it is possible to alter the sexual orientation of homosexuals. He described his treatment method which uses no medical drugs, showing that it was successful in the treatment of 200 cases of homosexuality among men and women. He called it ‘reparative therapy’. No one objected to his conclusions on scientific grounds. Yet the world’s two leading health organizations severely criticized him. Both the World Health Organization (WHO) and the Pan American Health Organization (PAHO) attacked him and he was forced to apologize. And his apology was published on Newspapers and magazines “psychiatry giant sorry for backing gay cure”.

The question here is: Did they refute his claim? The answer is: No.

The two organizations just published a statement alleging that Dr Spitzer’s reparative therapy involves health risks. How was that?! They argued that it makes a gay person feel ashamed and may even lead such a person to commit suicide. The two organizations also published recommendations that may be described as ‘autocratic’, trying to frighten anyone who dissents.

They urged the enactment of legislation that would punish anyone who tries to promote ‘reparative’ therapy for homosexuals. They want such therapy to be outlawed. They even encourage that any such activity be exposed because ‘it represents a violation of human dignity’. They further require that individuals who promote such reparative therapy to be reported to the relevant authorities.

I think that such practices are best described as a sort of Spanish Inquisition. And, it is certainly naïve to assume that an objective study can be undertaken in such an environment.

Yet, some media outlets continue to describe Dean Hamer’s falsehood as ‘scientific’.

There is always a simple strategy: silence scientists and establish a lobby to promote your falsehood. And this is how people believe in “Pseudoscience”.

Everyone who is following the media can see the efforts done to familiarize the process of adopting children by gay parents. And at the same time they do acknowledge its impact on children values and behaviour towards sexual relationships.

You can imagine a child raised by gay parents mingled with a community of gays. He grew up with these practices which are contrary to human nature. By the time when he wanted to change himself, live a normal life and seek help, not only he was prevented by law, but also any attempts to help him was criminalized!

The Holy Quran tells us about Allah’s Prophet who was sent to warn his people not to commit this disgraceful act. He is the Prophet Lot peace be upon him, he asked his people frowningly:

"And [We had sent] Lot when he said to his people, "Do you commit such immorality as no one has preceded you with from among the worlds? Indeed, you approach men with desire, instead of women. Rather, you are a transgressing people."

While Prophet Lot fully accomplished his duty his people didn’t follow him. But they accused him and his family of this weird charge:

But the answer of his people was only that they said,

"Evict them from your city! Indeed, they are men who keep themselves pure."

So what were the consequences?

God punished them with the proper punishment for their abnormal practices.

“So the shout took hold of them at sunrise (73) And We made the upside there of downwards, and We rained on them stones of baked clay (74).

Would anyone be thoughtful? 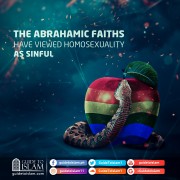 The Abrahamic faiths have viewed homosexuality as sinful