In an emphatic hadith, the Prophet (peace and blessings of Allah be upon him) stated, “I have been sent only for the purpose of perfecting good morals.”  In this hadith, the Prophet (peace be upon him) has clearly stated that one of the important aspects of his being sent as a prophet was to show what the good morals, behavior and manners are. This is a clear sign that behavior and manners clearly fall within the scope of the teachings of Islam. A Muslim cannot escape this fact and he must adjust his behavior accordingly.

There are actually numerous statements of the Prophet (peace and blessings of Allah be upon him) related to the importance of having good character. Here, just a few will be presented to simply highlight the im-portance of this topic.

The Prophet (peace and blessings of Allah be upon him) said, “I am a guarantor of a house in the highest part of Paradise for the one who makes his behavior good.”  This hadith clearly shows the reward for improving and perfecting one’s behavior. Some people claim that their character is simply what they are born with and there is nothing they can do to change or adjust it. That is simply not true. As demonstrated earlier, much of the driving force behind one’s character has to do with what one believes about God, this life, the Hereafter and so on. Thus, the Prophet (peace and blessings of Allah be upon him) said, “Piety and righteousness is being of good character.”  Piety is achievable but it may take some effort. In fact, when the Messenger of Allah (peace be upon him) described the hypocrites, those of weak or false faith, he described them by their actions and behavior: lying while speaking, breaking one’s trust and so on.

The most important category is behavior with respect to the Creator, as that will influence all of the other categories. This embodies having the proper relationship with Allah and submitting to Him in a sincere fashion with a correct attitude. Aspects of this relationship have been touched upon throughout this work.

The last two categories stated above imply good behavior toward all other living creatures on earth as well as all that Allah has placed within this cosmos. A Muslim is not free to behave in any way he wishes with respect to animals or inanimate objects. Indeed, he will be answerable to Allah concerning his behavior towards all things. Everything in this creation that has been put at the disposal of humankind is nothing more than a trust from God. There are, for example, numerous hadith that touch upon how Muslims should treat animals. For example, even with respect to slaughtering an animal for consumption, which Allah has permitted humans, the Prophet (peace and blessings of Allah be upon him) said, “Verily, Allah has prescribed excellence in all things. Thus, if you kill, kill in a good manner. If you slaughter, slaughter in a good manner. Each of you should sharpen his blade and spare suffering to the animal he is slaughtering.”  This fact was not lost on the early Muslims as can be seen in the statement of al-Fudail ibn Iyaad, “By Allah, it is not allowed for you to harm a dog or a pig without just cause, how then can you harm a Muslim?”

Just the Tip of The Iceberg

The Harmony between Laws of the Universe and Islamic Law 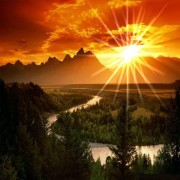 Taking into Consideration the Welfare of this World and the Hereafter