Muslims in the West

Islam created a civilization that has produced great intellectual figures, a distinct art and architecture, dazzling achievements in science and technology, and an equitable social order based on the teachings of the Quran and the Prophet Muhammad. Its scientists formulated theories and carried out practices that were widely emulated by Western scientists during the Middle Ages and even the Renaissance.

Its followers today extend from Morocco to the Philippines, and it includes among its adherents different races and peoples of Asia, Africa, Europe, Australia, and the Americas. In fact, more than three-quarters of the total Muslim population in the world is found in non-Arab countries.

A recent study has highlighted that the Muslim population in Europe is over 38 million. More than 11 million can be found in North America. If the 16.5 million who are found in Russia are included under the definition of ‘West’ the total Muslim presence in the West is around 60 million.[1] Germany, France and Britain have the largest populations in Western Europe. Germany with 4 million, mostly of Turkish origin, has the largest population (5% of the total) – a larger number than Palestine, Lebanon or Kuwait. France’s population, predominantly North African, is around 3.6 million (6%)[2] and the UK has 1.6 million, predominantly South Asian Muslims (2.7%).

Not all European Muslims are of migrant origin. Six million live in Bosnia (40%), Albania (79.9%) and Kosovo (89.6%), the latter two countries being the only Muslim-majority states in Europe. These populations are long established, beginning when the territories were part of the Ottoman Empire. Conflict between Muslim Arabs and the Byzantine Empire began soon after the establishment of Islam, with conquest of the Syrian, Armenian, Egyptian and North African provinces of the Christian Empire. Although Constantinople was besieged twice and the Caucasus conquered, it was not until the fall of the capital of the Byzantines in 1453 that its European territories came under the sphere of Islam. The Volga Bulgarians had accepted Islam as the state religion in the tenth century and much of European Russia and Ukraine had come under Muslim rule when the Mongols accepted Islam as their state religion in the early fourteenth century. Spain and Portugal (Al-Andalus) became effectively Muslim nations by the tenth century. They ruled the region until their expulsion by the Normans in 1072. There is strong evidence to suggest that the Muslim presence in Southern Europe influenced the Renaissance of the twelfth century, when it is argued that many aspects of Muslim culture were introduced into Western Europe.

The tide turned in the seventeenth century when the European powers gradually established supremacy through expansion overseas and the creation of their various empires. At their heyday during the late nineteenth century and into the twentieth, European colonial empires (British, French, Dutch) colonized regions in the Muslim world such as North Africa, the Horn of Africa, the Malay archipelago, the Indian subcontinent and sub-Saharan Africa.

As in most Western European nations, Islam is the second largest religion in the country, 4.3 million Muslims comprising 5.4% of the population. The majority of Muslims in Germany is of Turkish origin (63.2%), followed by smaller populations from Pakistan, countries of the former Yugoslavia, Arab countries, Iran and Afghanistan. The last three would be mainly of refugee origin whereas Turkish and Pakistani migrants are predominantly labour-migrants. Around 1.9 million Muslims have become German citizens (2.4%) and, as of 2006, it is estimated that around 15,000 are converts of German ancestry.

According to the 2001 census 1,536,015 Muslims live in England and Wales, where they constitute around 3 per cent of the population but are not evenly distributed. In England, 40% of Muslims live in London, where they make up 8.5% of the population. There are also large numbers of Muslims in Birmingham, Manchester, Bradford, Luton, Slough, Leicester and the mill towns of northern England. In these cities they are concentrated in one or a few areas. Most Muslims in Britain originate from South Asia (in particular Pakistan, Bangladesh and India) but there are also substantial populations from the Middle East, Somalia, Malaysia, Turkey, the Balkans, Afghanistan, Iran, North Africa and Indonesia, while others have come from African countries such as Nigeria, Uganda and Sierra Leone.

Muslims in the US

Many Africans who were brought to the New World as slaves were Muslims. Most were forcibly converted, but a few tried to practice Islam in secret. Islam began growing in the African American community in the early 1900s. It was not authentic Islamic teachings they were learning, however, but a mixture of Islam, Christianity, and black nationalism. The “Nation of Islam,” a black supremacist group, has never adhered to standard Islamic teachings; its doctrines about racial hatred and new messengers from God are against Islam. Most modern African American Muslims follow orthodox Islam. The number of converts to Islam among blacks, Hispanics, and whites continues to grow each year. The earliest-known Caucasian American convert to Islam was Alexander Russell Webb, the U.S. ambassador to the Philippines in the late nineteenth century. He published a book in 1893 titled “Islam in America.” Today an estimated 100,000 Caucasian Muslims live in North America and Europe. The majority are women. There are no firm estimates of the numbers of Latinos who have accepted Islam in North America. Figures range from 10,000 to as high as 35,000. Today several national Hispanic Muslim organizations are at work in the US and Mexico. Among the most prominent are the Association of Latin American Muslims (ALAM); Alianza Islamica; and PIEDAD, a women’s advocacy group. ALAM, which operates out of Washington, D.C., has established mosques in Mexico and in the American Southwest and publishes a regular newspaper called “The Voice of Islam.”

These are primarily people who emigrated in four great waves from various parts of the Muslim world, starting in the late 1800s. Each influx of Muslim immigrants can be summarized as follows:

1967–present: Muslims from the Indian subcontinent, the Arab world, and Africa arrive. Most are educated professionals or come as students and remain.

Several national Islamic organizations operate in North America provide a forum for Muslims to come together to talk about the challenges of, and solutions for, living as Muslims in the West. Every year, the four largest organizations hold conventions in a major American city. These gatherings follow a standard format with lectures, shows, bazaars, and exhibits.

Each organizations has its own history of contribution to the lives of Muslims in North America. They distribute information on Islam; organize prayer times; advocate on behalf of Muslim concerns; educate Muslims and non-Muslims about Islam; and publish books, pamphlets, and magazines that guide the faithful in their daily lives. The major ones are:

The Islamic Society of North America (ISNA) is a well-known Muslim organization that historically has acted as an umbrella group for some local mosques and associations.

The Islamic Circle of North America (ICNA) was founded by immigrants from the Indian subcontinent. It has chapters in many major cities and engages in humanitarian work, among others, within the US and overseas.

The Muslim Student’s Association (MSA) Founded by foreign students in the late sixties, it has since grown to be the most important indigenous Islamic student organization, with chapters in nearly every college in North America. It tackles issues related to campus life for Muslims. 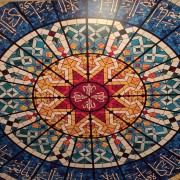 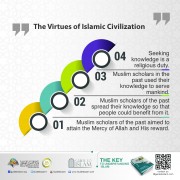 The virtues of Islamic civilization