Preservation of the Holy Quran

The Quran has been preserved and transmitted like no other religious text of the world. It was transmitted primarily by memorization and in writing. This lesson gives evidence for this.

· To appreciate the authenticity of the Holy Quran in its original form due to its meticulous preservation and transmission without any alteration.

· Establish one’s faith and conviction in the Holy Quran through evidence of its preservation and transmission.

·Sunnah - The word Sunnah has several meanings depending on the area of study however the meaning is generally accepted to be, whatever was reported that the Prophet said, did, or approved.

The Quran and the Sunnah of Prophet Muhammad are the two divinely revealed sources of Islam, and on them the Islamic faith and worship are based.

Someone might think, ‘Why is it important for a new Muslim to know about this topic?’  First, because knowing at least the basic information would increase his faith and confidence that he is on the straight path.  He would feel his religion is not built on mere claims, but on revelation that Allah promised and actually preserved.  Second, a person armed with basic knowledge is less likely to get affected by any doubts he will come across.

Behold, it is We Ourselves who have bestowed from on high, step by step, this reminder and, behold, it is We who shall truly guard it (from all corruption)

Let us see evidence of how it has been preserved through the ages.

The Quran has been preserved and transmitted like no other religious text of the world.  It was transmitted primarily by memorization and in writing as we will show.

At that time, there were no printing presses.  Books had to be written manually by specialized scribes and making a copy required a similar effort.  The Quran was dictated word by word and letter by letter by the Prophet himself to specialized scribes.[1]  The Prophet passed away in 632 AD.  Afterwards, Abu Bakr, the first leader of the Muslims, gathered the original scripts of the scribes into one book, and then some time later, when the Muslim empire stretched from East to West,  Uthman, the son-in-law of the Prophet and the third Caliph, ordered five copies of the original to be made and distributed to all parts of the Muslim world some twenty years later.[2]

Today, we have three manuscripts of Quran which are traced back to the Prophet’s son-in-law, the Caliph Uthman.

(1) The Samarqand Manuscript located in Tashkent, Uzbekistan.  It is written on a parchment from gazelle skin.  According to Memory of the World Program, UNESCO, an arm of the United Nations, ‘it is the definitive version, known as the Mushaf of Uthman, superseding all other versions.’[3]

Mr. von Denffer, a German scholar, writes about the manuscript:

“It may be the Imam manuscript (name used for the copy kept by Uthman himself) or one of the other copies made at the time of Uthman.”[4] 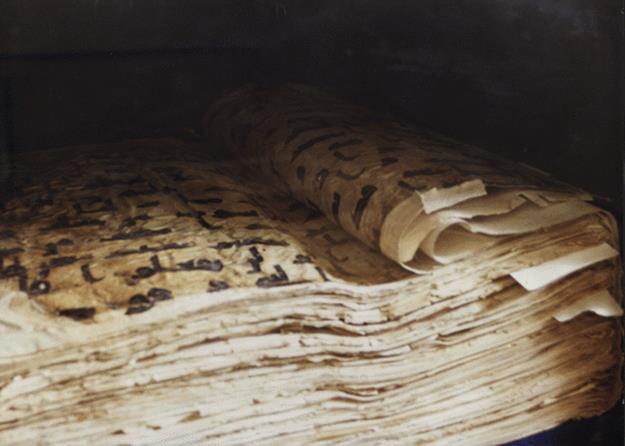 Figure 1 This manuscript, held by the Muslim Board of Uzbekistan, is the earliest existent written version of the Quran.  It is the definitive version, known as the Mushaf of Othman, superseding all other versions.  Image courtesy of Memory of the World Register, UNESCO.

Figure 2  The Holy Quran of Othman in its glass-fronted safe.  Image courtesy of Memory of the World Register, UNESCO.

(3) The third manuscript is kept in Al-Hussein Mosque, Cairo, Egypt and can be seen below.

Mr. von Denffer writes about it:

“...it is quite possible that it was copied from the Mushaf of Uthman.”[6]

Allah has made the Quran easy to memorize

And in truth We have made the Quran easy to remember; who, then, is willing to take it to heart

The ease with which Quran is memorized is inimitable.  There is not a single scripture or religious text in the world that is as easy to memorize, even non-Arabs commit the Quran to memory easily.  Rarely do we find people having memorized the whole Bible, whereas, the entire Quran is memorized by almost every Islamic scholar and millions of ordinary Muslims, generation after generation.  Almost every Muslim has some portion of the Quran memorized to read in his prayers.  The following steps are traditionally taken to master the Quran:

First, the Quran is memorized by a child, males and females, at a fairly young age.  The process usually takes 2-4 years.

Second, just memorizing the Quran is not sufficient.  Quran is not just words, but sounds and meaning also.  The Quran, must be voiced exactly the way it was read by Allah’s Prophet 1400 years ago.  It has to be recited the way it was revealed by Allah.  This is done by a rock-solid 1400 year old tradition of mastering the rules of recitation (tajweed) at the feet of a master who in turn acquired the knowledge from his teacher, an ‘un-broken chain’ going all the way back to the Prophet of Allah.  The process usually takes 3-6 years.  After mastery is achieved and the recitation checked for lack of errors, a person is granted a formal license (ijaza) certifying he or she has mastered the rules of recitation and can now recite the Quran the way it was recited by Muhammad, the Prophet of Allah.

“For Muslims the Quran is much more than scripture or sacred literature in the usual Western sense.  Its primary significance for the vast majority through the centuries has been in its oral form, the form in which it first appeared, as the “recitation” chanted by Muhammad to his followers over a period of about twenty years… The revelations were memorized by some of Muhammad’s followers during his lifetime, and the oral tradition that was thus established has had a continuous history ever since, in some ways independent of, and superior to, the written Quran… Through the centuries the oral tradition of the entire Quran has been maintained by professional reciters (kurra).  Until recently, the significance of the recited Quran has seldom been fully appreciated in the West.”[8]

Not only the words of the Quran have been preserved, but the original sounds of those words have been preserved as well.  No other religious text has been preserved in a similar manner – a claim any objective reader can verify for themselves.  Thus, the Quran stands inimitable in its mode of preservation over the centuries as prophesized and promised by Allah Himself.

Figure 4 The image is a typical license (ijaza) issued at the end of perfecting Quran recitation certifying a reciter’s unbroken chain of instructors going back to the Prophet of Islam.  The above image is the ijaza certificate of Qari Mishari bin Rashid al-Afasy, well known reciter from Kuwait, issued by Sheikh Ahmad al-Ziyyat.