Kindness to neighbors is a common point that all religions share. But Islam gives greater importance to how we should deal with our neighbors.

The Quran makes it clear that neighbors are entitled to kindness, whether they are related to us or not. God says in the Quran:

Worship God alone and do not associate with Him any partners. Be kind to your parents and near of kin, to orphans, the needy, the neighbor who is related to you and the neighbor who is a stranger, the friend by your side, the wayfarer, and those whom your right hands possess. God does not love those who are arrogant and boastful. (4: 36)

Prophet Muhammad (peace be upon him) urged his companions and all Muslims in all generations to look after their neighbors and be ready with help whenever help is needed, even by a neighbor whose behavior is far from neighborly.

Archangel Gabriel continued to urge me to be kind to neighbors until I started to think that he would tell me that they have a share of my inheritance. (Al-Bukhari)

Whoever believes in God and in the Day of Judgment must not offend his neighbor. (Al-Bukhari)

Caring for Neighbors in Need

If a person is aware of his neighbor’s need and does not give a helping hand, he is not a believer. Prophet Muhammad said:

A man is not a believer who fills his stomach while his neighbor is hungry. (Authenticated byAl-Albani)

Lady Aisha once asked Prophet Muhammad about which neighbor is the higher is his claim to our kindness.

“Messenger of God! I have two neighbors; whom should I favor with my gifts?”

To the one next door to you. (Al-Bukahri)

When Prophet Muhammad immigrated to Madinah, he sought to strengthen ties between his followers. His community was steadily growing in power and numbers. He urged his followers to maintain the best of neighborly relations. He considered kindness to neighbors as a sign of strong faith.

He will not enter Paradise whose neighbor is not secure from his wrongful conduct. (Muslim)

The Prophet used to show kind treatment to everyone and urged his companions to do so.

He visited his Jewish neighbor when he was sick.

He gifted his non-Muslim neighbor who used to abuse him.

“Have you presented a gift from it to my neighbor, the Jew, for I heard the Messenger of Allah say:

Gabriel kept on commending the neighbor to me so that I thought he would make an heir? (Abu Dawud)

These are just some of the many hadiths when the Prophet emphasized and encouraged kind treatment towards neighbors.

This shows how excellent is the character of Prophet Muhammad (peace be upon him).

He is a model Muslims and for all who would like to have a best character. 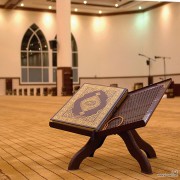 The True Religion (part 4 of 8): The Message of False Religions