Tawhid of the Messengers

The Tawhid that the Messengers called to, and with which the Books were revealed, is of two types: Tawhid al-Ma`rifah wal-Ithbat and Tawhid al-Talab wal-Qasd.

The first deals with affirming the being of the Lord, Most High, His Attributes, His Names, His actions, His speaking, His Books and His conversing with whoever He wills of His servants; it also deals with affirming His decree and destiny and His infinite wisdom. This category has been articulated in the Qur´an with complete clarity as can be seen in the beginning of Surah al-Hadid, Surah Ta Ha, the end of al-Hashr, the beginning of Tanzil Sajdah, the beginning of Ali `Imran, the whole of Surah al-Ikhlas, and others.

The second category is dealt with in His sayings

Say: Disbelievers! I do not worship what you worship.

Say, People of the Book! Come to a proposition which is the same for us and you  that we should worship none but Allah and not associate any partners with Him and not take one another as lords besides Allah. If they turn away, say, Bear witness that we are Muslims.

Indeed every Surah in the Quran deals with both types of Tawhid and calls to them. This is because the Quran either contains information about Allah, His Names and Attributes, and His actions and words, this then is Tawhid dealing with knowledge and information [about Allah]; or it calls man to worship Him alone without any partner and to relinquish all that is worshipped besides Him, this then is Tawhid dealing with intent and goal; or it contains command and prohibition and the injunction to obey Him, His prescriptions and proscriptions, this then is the rights of Tawhid and those matters that complete it; or it deals with honouring the people of Tawhid and informing about how they were dealt with in this life and the honour they will receive in the Hereafter, this then is the recompense of Tawhid ; or it deals with information about the people of shirk and how they were dealt with in this life and what will be unleashed against them of punishment at the final destination, this then is the recompense of those who left the bounds of Tawhid . Therefore, the whole Quran deals with Tawhid , its rights and its recompense, and it deals with shirk, its people and their recompense. [1]

This is the sphere of Tawhid and His command. The servant witnesses the oneness of the Lord, the Creator, he witnesses His will being implemented, and he witnesses the creation dependent on Him his witnessing the Tawhid of the Lord and His being One with respect to creation, implementing His will, and the workings of His decree opens the door of seeking refuge and resorting to Him, and he realizes his dire need of Him. It will guide him to the threshold of servitude and throw him at His door as one who is needy, incapable, indigent, one who does not possess the ability to bring harm or benefit, life or death, or resurrection for himself. Witnessing His command and prohibition, His reward and punishment leads him to praise Him, to do His utmost to obey Him and to censure himself for his faults and shortcomings. Hence his life will revolve around witnessing the greatness, wisdom, perfect power, pre-eternal knowledge, and unfathomable providence (of Allah), and his witnessing his own shortcomings and faults. He will then diligently correct his souls defects and deeds. Such a servant is one who has been granted accord, who is aided, and has divine providence showered on him. This is the sphere of the Prophets. Adam said,

Our Lord! We have wronged ourselves. If You forgive us not and have not mercy on us, surely we are of the lost!

My Lord, in You do I seek refuge that I should ask of You that whereof I have no knowledge. Unless You forgive me and have mercy on me I shall be among the lost.

The Imam of the Hunafa and the Shaykh of the Prophets, Ibrahim, said,

Who created me, and He does guide me, who feeds me and waters me, when I am sick, He heals me, who causes me to die, then gives me life (again), and who, I ardently hope, will forgive me my sin on the Day of Judgment.

My Lord! Make safe this territory, and preserve me and my sons from serving idols.

Hence he knew that it is Allah who comes between a servant and his committing shirk and worshipping idols, he knew that there was no Lord besides Him and therefore directed this request to Him. 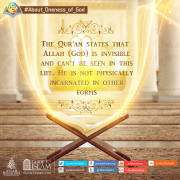 "The creation has a Creator."