The Death of the Prophet ﷺ

The Prophet Muhammad ﷺ conducted one final pilgrimage to Mecca when he was nearing 63 years of age. He delivered a famous address, known as the Farewell Speech, and then retired to Medina. After suffering through several days of an intense fever, with his head resting in his wife’s lap, the Prophet Muhammad ﷺ passed away.  He was buried in the place where he breathed his last. Today the famous green dome of the Prophet’s Mosque in Medina marks the spot where his grave lies.

His life and mission touched upon the hearts of a people who were steeped in superstition and idolatry. The teachings he promoted uplifted the status of women, gave rights to the poor, regulated the moral and social life of his followers, and provided a path to salvation for millions.

Fairness demands that his claim to prophethood be given some consideration by those who have do not yet believe in the message of Islam.

“The lies (Western slander) which well-meaning zeal has heaped round this man (Muhammad) are disgraceful to ourselves only.” — Thomas Carlyle in Heroes and Hero Worship and the Heroic in History, p. 184

“The greatest success of Mohammad’s life was effected by sheer moral force....It is not the propagation but the permanency of his religion that deserves our wonder, the same pure and perfect impression which he engraved at Mecca and Medina is preserved after the revolutions of twelve centuries by the Indian, the African and the Turkish proselytes of the Koran....The Mahometans have uniformly withstood the temptation of reducing the object of their faith and devotion to a level with the senses and imagination of man. ‘I believe in One God and Mahomet the Apostle of God’ is the simple and invariable profession of Islam. The intellectual image of the Deity has never been degraded by any visible idol; the honors of the prophet have never transgressed the measure of human virtue, and his living precepts have restrained the gratitude of his disciples within the bounds of reason and religion.” — Edward Gibbon and Simon Oakley in History of the Saracen Empire, London, 1870

“My choice of Muhammad to lead the list of the world’s most influential persons may surprise some readers and may be questioned by others, but he was the only man in history who was supremely successful on both the secular and religious level....It is probable that the relative influence of Muhammad on Islam has been larger than the combined influence of Jesus Christ and St. Paul on Christianity....It is this unparalleled combination of secular and religious influence which I feel entitles Muhammad to be considered the most influential single figure in human history.” — Michael Hart in The 100, A Ranking of the Most Influential Persons In History, New York, 1978

“In all things Muhammad was profoundly practical. When his beloved son Ibrahim died, an eclipse occurred and rumors of God’s personal condolence quickly arose. Whereupon Muhammad is said to have announced, ‘An eclipse is a phenomenon of nature. It is foolish to attribute such things to the death or birth of a human being.’”

“At Muhammad’s own death an attempt was made to deify him, but the man who was to become his administrative successor killed the hysteria with one of the noblest speeches in religious history: ‘If there are any among you who worshiped Muhammad, he is dead. But if it is God you Worshiped, He lives for ever.’” — James Michener in Islam: The Misunderstood Religion, Reader’s Digest, May 1955, pp. 68-70

“Head of the State as well as the Church, he was Caesar and Pope in one; but he was Pope without the Pope’s pretensions, and Caesar without the legions of Caesar, without a standing army, without a bodyguard, without a police force, without a fixed revenue. If ever a man ruled by a right divine, it was Muhammad, for he had all the powers without their supports. He cared not for the dressings of power. The simplicity of his private life was in keeping with his public life….In Mohammadanism everything is different here. Instead of the shadowy and the mysterious, we have history….We know of the external history of Muhammad....while for his internal history after his mission had been proclaimed, we have a book absolutely unique in its origin, in its preservation....on the Substantial authority of which no one has ever been able to cast a serious doubt.” — Reverend Bosworth Smith in Muhammad and Muhammadanism, London, 1874

“His [Muhammad’s] readiness to undergo persecution for his beliefs, the high moral character of the men who believed in him and looked up to him as a leader, and the greatness of his ultimate achievement—all argue his fundamental integrity. To suppose Muhammad an impostor raises more problems than it solves. Moreover, none of the great figures of history is so poorly appreciated in the West as Muhammad.... Thus, not merely must we credit Muhammad with essential honesty and integrity of purpose, if we are to understand him at all; if we are to correct the errors we have inherited from the past, we must not forget the conclusive proof is a much stricter requirement than a show of plausibility, and in a matter such as this only to be attained with difficulty.” — W. Montgomery Watt in Muhammad at Mecca, Oxford, 1953

“He was sober and abstemious in his diet and a rigorous observer of fasts. He indulged in no magnificence of apparel, the ostentation of a petty mind; neither was his simplicity in dress affected but a result of real disregard for distinction from so trivial a source.

“In his private dealings he was just. He treated friends and strangers, the rich and poor, the powerful and weak, with equity, and was beloved by the common people for the affability with which he received them, and listened to their complaints.

“His military triumphs awakened no pride nor vainglory, as they would have done had they been effected for selfish purposes. In the time of his greatest power, he maintained the same simplicity of manners and appearance as in the days of his adversity. So far from affecting a regal state, he was displeased if, on entering a room, any unusual testimonials of respect were shown to him. If he aimed at a universal dominion, it was the dominion of faith; as to the temporal rule which grew up in his hands, as he used it without ostentation, so he took no step to perpetuate it in his family.” — Washington Irving in Mahomet and His Successors, 1850

“The good sense of Muhammad despised the pomp of royalty. The Apostle of God submitted to the menial offices of the family; he kindled the fire; swept the floor; milked the ewes; and mended with his own hands his shoes and garments. Disdaining the penance and merit of a hermit, he observed without effort of vanity the abstemious diet of an Arab.” — Gibbon in The Decline and Fall of the Roman Empire, 1823

"God's Messenger is so well known for his sense of justice that a Jew can appeal to him even in a conflict with a Muslim who has attacked a Jew." - Allen S. Maller, "Explorations and Responses: What a Reform Rabbi Learns from Prophet Muhammad," Journal of Ecumenical Studies 45, no. 1 (2010).

"If Jews, Christians, and Muslims had only followed this teaching of Prophet Muhammad, we could have avoided many centuries of bloodshed and massacres, three of the best known examples being the many Christian Crusades in Spain, Poland, and the Middle East; the Roman Catholic Inquisition in Spain and Portugal; and the thirty-year war between Catholics and Protestants in Germany and central Europe." - Allen S. Maller, "Explorations and Responses: What a Reform Rabbi Learns from Prophet Muhammad," Journal of Ecumenical Studies 45, no. 1 (2010). 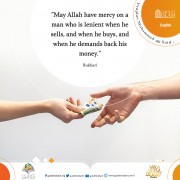 Prophet Muhammad encouraged people to add value to the environment 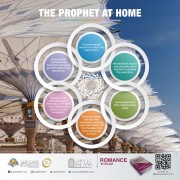 The prophet at home