The Five Pillars of Islam

Every sound structure must have a solid foundation in order to remain strong. Islam’s foundation is the five pillars it was built upon, forming the basis of Islamic teaching as taught by Prophet Muhammad (peace be upon him), wherein he said:

Islam is built upon five pillars:

1. The Declaration of Faith (Shahadah);

These five pillars are a cornerstone of a Muslim’s life.

The declaration of faith is bearing witness (testifying) that there is no deity worthy of worship but Allah (God), and that Muhammad (peace be upon him) is His Servant and Messenger. It must be based on a sincere and firm belief in the heart, as well as being uttered verbally.

The first part of the declaration implies that:

The second part of the declaration is that Muhammad (peace be upon him) is Allah’s Servant and final Messenger. He is the final Prophet in a long chain of Prophets sent to call the people to the obedience and worship of Allah alone. Some of these Prophets include Adam, Noah, Abraham, Ishmael, Isaac, Jacob, Joseph, Moses, David, Solomon and Jesus (peace be upon them all).

The Prophet Muhammad (peace be upon him) was sent with the Qur’an (the final revelation), in order to teach the people Allah’s message, and serve as an example for all to follow.

Some benefits of the Declaration of Faith:

“Indeed, I am Allah! There is none worthy of worship but I, so worship Me and offer the prayer for My remembrance.”Qur’an 20:14

The five daily prayers form the most important ritual of worship in a Muslim’s life; one each at dawn, noon, mid-afternoon, sunset and nightfall. Prophet Muhammad (peace be upon him) said:

“Prayer is a pillar of the religion (Islam). Whoever establishes it, establishes religion; and whoever destroys it (e.g. neglects it), destroys religion.”

Prayer establishes a personal and spiritual connection between the Muslim and his Creator, based on faith, love, hope and reverence. When prayer is performed correctly with complete concentration, humility and sincerity, it will have an enduring effect on the person, filling his heart with contentment, peace and closeness with Allah.

Prayer is the centre of a Muslim’s life and the best way to achieve submission to Allah. It can be offered almost anywhere clean: such as in fields, offices, factories or universities; and takes only a few minutes to perform. It consists of recitation from the Holy Qur’an, supplicating to and praising Allah, with various body postures such as standing, bowing, prostrating and sitting. Through prayer, the Muslim remembers the greatness of his Creator and supplicates to Him for his needs and wishes.

Repeatedly humbling oneself before Allah prevents a person from falling into sin, and is a type of purification for one’s soul, as mentioned in the Qur’an:

“Verily, the prayer prevents one from the shameful and evil deeds.”

. Prayer is also an opportunity for repentance and seeking forgiveness from Allah.

The Messenger of Allah (peace be upon him) asked his companions,

“If one of you had a river by his door in which he bathed five times a day, would any filth remain on him?” They replied, “No.” Then the Prophet added, “Likewise, Allah wipes away sins with the five daily prayers.”

“Those who establish the prayer (salah) and give the charity (zakah) … these are the ones who will prosper.”

All things belong to Allah, including wealth, which is considered as a trust. The prescribed charity (zakah) is an obligation on every Muslim who meets certain criteria (e.g. attained maturity, is sane, has wealth above a certain threshold). A small portion of wealth (includes 2.5% monetary and may include other assets) which must be paid annually to those who are eligible, as prescribed in the Qur’an (e.g. the poor and needy).

The Prophet (peace be on him) said:

“Allah has made zakah obligatory simply to purify your remaining wealth.”

The meaning of the word “zakah”, is both ‘purification’ and ‘growth’. This is similar to the pruning of plants, whereby regularly trimming provides balance and encourages growth. By fulfilling this obligation, Muslims purify their remaining wealth, as well as ensure both financial and spiritual growth.

Some benefits of zakah:

A person may also give as much as they please as additional voluntary charity.

As with any act of worship, fasting requires obedience and submission to Allah’s commands through the highest degree of commitment and sincerity. Every year during the month of Ramadan (the 9th month of the lunar calendar), Muslims fast from dawn until sunset, abstaining from three key human needs – food, drink and sexual relations. One should also abstain from all sinful actions.

Fasting during Ramadan is obligatory on every physically and mentally capable adult Muslim. Children, the sick, the mentally unfit, the elderly, menstruating women, and travellers are exempt.

Some benefits of fasting:

“And Hajj (pilgrimage to Makkah) to the House (Ka‘bah) is a duty that mankind owes to Allah, for those who can afford the expenses (for one’s transportation, provision and residence).”

Pilgrimage to the Holy city of Makkah (in Saudi Arabia) and other sacred sites must be performed at least once in a person’s life, if they are physically and financially capable.

Performing the pilgrimage is a temporary suspension of all worldly activities, and is a time for one to reflect, worship, seek the forgiveness of Allah and attain His closeness.

The Pilgrimage is an annual event in the 12th month of the lunar calendar (Dhul-Hijjah in Arabic), which unifies people of every colour, race, status and age, as they join in worship of the One True God. All pilgrims wear simple and similar clothing, which strips away distinctions of class and culture, so that all stand equal before Allah.

Prophet Muhammad (peace be upon him) said,

“Whoever performs Hajj and does not utter obscenities or commit sin, will come back just like the day when his mother bore him (i.e. pure of sins).”

Hajj involves following in the footsteps of Prophet Abraham, as taught to us by Prophet Muhammad (peace be upon them). This great act of worship consists of many components including sacrificing an animal, supplicating, visiting and praying at various sites, circling the Ka’bah, walking between two mountains, as well as many other rituals, all of which are performed over a period of 6 continuous days.

Such an experience is life-altering and humbles a person, making them more patient and thankful to Allah. Brotherhood is increased, as is the sense that all Muslims, regardless of their differences, are one nation. 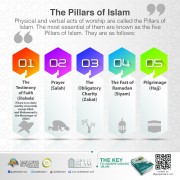 The pillars of Islam

Core Religious Practice of Islam: The Five Pillars of Islam 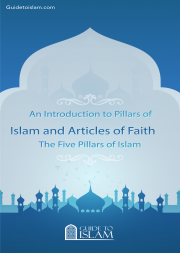 The pillars of Islam