The Quran God Speaks to The People of the World

The Holy Quran tells us

O mankind! We have created you (from a) male and a female; and we have made you into nations and tribes so that you may know one another

The people of the world can live together in peace. We know that is God's vision. Now that must be our work here on Earth.” US President Barack Obama at Cairo University, Egypt 6/04/09

How the Quran Reached Us?

● Muslims have a tradition of memorizing the book since the time of the Prophet Muhammad .
● Committing the Quran to memory acted as a great aid for its preservation.
● A person who is has memorized the Quran is known as a hafiz.
● Today, millions of men, women, and children have memorized the Quran. Many of them do not speak Arabic.

Form & Structure of the Quran

● The Quran is not like any other book; it was not written in chronological order, where it has a beginning, a middle, and end.
● The Quran is not arranged based on topics or subject matter.
● The Quran was not sent down as a complete book; rather, portions were revealed over a period of 23 years. For this reason, it is essential to know in what circumstances the verses were revealed in order to have a proper understanding of the Quran. Otherwise, it could be misunderstood.
● The Quran in printed form is anywhere between 400-600 pages long, roughly the size of the New Testament.
● There are 114 chapters in the Quran.
● All the chapters with the exception of one begin with the sentence Bismillahir Rahmanir Raheem, 'In the name of Allah, the Most Merciful, the Compassionate.'
● The longest chapter of the Quran is Surah al-Baqarah (the Cow) with 286 verses, and the shortest is Surah Al-Kawther (‘The Abundance’) with 3 verses.

● The Quran is treated with immense respect by Muslims because it is the sacred word of God.
● While the Quran is being recited, Muslims behave with reverence and refrain from speaking or making distracting noise.
● Muslims would not place the Quran on the floor and out of respect it would be placed on the top of a bookshelf.

The Quran has scientific information that was unknown 1400 years ago. Here are a few examples:

● The development of the embryo is accurately described in the Quran (Quran 23:12-14). So striking is this description, that a world-renowned expert in the field

Dr. Keith Moore, said, “It is clear to me that these statements must have come to Muhammad from God, because almost all of this knowledge was not discovered until many centuries later. This proves to me that Muhammad must have been a messenger of God.”

The sun is not stationary, but moves in a specific direction.

● The fact that living things consist mostly of water was discovered only after the invention of the microscope, but the Quran states,

We made every living thing from water? Will they not believe

● That mountains have deep stake-like roots was not known, until after the development of the theory of plate tectonics in the beginning of the 20th century. Yet the Quran states,

Did We not make the earth a resting place? And the mountains as stakes?

What was the source of this information? The only reasonable answer is that God revealed the Quran to the Prophet Muhammad.

And if you are in doubt about what we have sent down upon our servant (Muhammad) then produce a chapter like it.

The Quran on the Quran‘This is the Book, concerning which there is no doubt, a guidance for those who are conscious of God

A guidance for humanity and clear proofs for the guidance and the criterion (between right and wrong).

O mankind! Indeed, there has come to you a convincing proof from your Lord, and We have sent down to you a manifest light (the Quran). So, as for those who believed in God and held fast to it (the Quran), He will admit them to His mercy and grace, and guide them to Himself by a Straight Path.

Goals of the Quran

● Telling us who is God and how to worship Him.
● Showing us the way of life that God wants us to live.
● Reforming our lives.
● Creating a spiritual and just society based on Divine guidance.
● To be successful in the life after death by getting to Paradise and being saved from Hell-Fire.

Gems from the Quran

And spend, it is better for your souls; and whoever is saved from the greediness of his soul, these it is that are the successful.

O you who believe! Stand firmly for justice, as witnesses to God, even as against yourselves, or your parents, or your kin, and whether it be (against) rich or poor

And be patient, for indeed, Allah does not allow to be lost the reward of those who do good

O you who believe! Bow down and prostrate yourselves and worship your Lord, that you may succeed

Description of Hell in the Qur'an 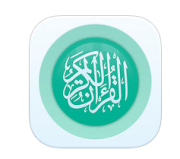 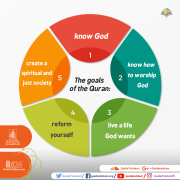 The goals of the Quran