The Prophet Muhammad peace be upon him was unlettered, meaning he did not know how to read and write. He did not have the capacity to write the Qur'an. The Qur'an refers to him as the unlettered prophet. The Qur'an even notes that the Muhammad, who became a Prophet at age 40, never wrote a book or anything before.

And you were not able] to recite a book before this [the Qur’ān) nor are you able to transcribe it with your right hand: in that case indeed would the talkers of vanities have doubted. Nay here are signs self-evident in the hearts of those endowed with knowledge: and none but the unjust reject Our signs (Qur’ān: 29:48–49).

How then could he suddenly compose a book that became the masterpiece of Arabic language? The Qur'an was revealed in the golden age of Arabic where the Arabs mastered the language, recited poetry on demand, and yet they could not match the linguistic beauty of the Qur'an. In the next century, grammarians used the Qur’ān as a reference for Arabic grammar. To claim that Muhammad, an unlettered, made up the Qur'an is not based on any actual evidence from his life.

If you read the Qur’ān, you will immediately recognize that it has a very confident tone. Most books begin with an apology from the author for any shortcomings in the book. Some books even have several editions to make up for the shortcomings of the previous edition. However, the Qur’ān is the opposite. There is a famous Arabic statement “The one who does not have something cannot give it.” If one does not have certainty, they cannot give it. The Qur’ān begins with a very powerful statement: This is the Book about which there is no doubt, a guidance for those conscious of Allah(Qur’ān 2:2). Such a confident tone is not that of a liar.

In the Qur’ān the Prophet peace be upon him is being addressed. He is being told what to say and preach. For instance, the Qur’ān says “Say: God is One”, this “say” is in the singular because it is addressed to him directly. It is difficult to accept that he composed the Qur’ān composed the Qur’ān on his own, because he would be addressing himself. One might say that he was a madman, but there is no indication of him being a madman. Rather he was intelligent, compassionate, and led an entire community. Madmen are not taken seriously and certainly cannot lead intelligent people to positively transform the entire world.

Furthermore, the Qur’ān criticizes and corrects the Prophet Muhammad peace be upon him for certain things he did or decisions he made. Had he been a liar he would not have made such corrections of himself.

No One Taught Him

Some people claim that Muhammad peace be upon him learned the Qur’ān from others. However, they provide no evidence to support this claim. They mention that Muhammad traveled when he was a trader but traveling by itself is not proof that someone is learning. The claim that he learned from someone cannot be true for several reasons. First, his life is the most documented in history. His Companions watched him eat, drink, sleep, lead the community, and interact with others. His followers were very intelligent people who would have noticed him leaving and learning the Qur’ān.

Second, there are things the Qur’ān mentions that no one at the time knew. These accounts are part of what was beyond your knowledge [Muhammad]. We revealed them to you. Neither you nor your people knew them before now, so be patient: the future belongs to those who are aware of God (Qur’ān 11:49). His critics could have refuted him by simply saying “we knew this” and this statement would have been proven false. Yet no one stood up and said we know this information. Some people claim that the Prophet peace be upon him plagiarized the Bible. However, again he did not read or write. Furthermore, the Bible was not yet translated into Arabic at the time.

Third, the Qur’ān was revealed over a period of 23 years. If he was learning from someone, we must ask where this person was throughout the entire time? If one says they were scared to come forward, then why didn’t they come forward after the Prophet peace be upon him became successful and conquered Arabia and take the credit for themselves? Fourth, sometimes people came to the Prophet peace be upon him and asked him questions. The answers would be immediately revealed, and these are documented in the Qur’ān.

There are many statistical, mathematical, and scientific evidence in the Qur’ān that the Prophet peace be upon him could not have possibly known or intentionally included. The Quran was revealed over 23 years, usually in response to different situations the Prophet and his Companions were facing. The word “day” is mentioned exactly 365 times in the Qur’ān. The word “month” is mentioned 12 times. There is a verse in the Qur’ān which states Truly, the example of Jesus, in God’s sight, is as the example of Adam; He created him of dust, then said He unto him, ‘Be,’ and he was (Qur’ān 3:59). The name Adam is mentioned 25 times in the Qur’ān, similarly the name Jesus is mentioned 25 times and they are not always mentioned in the same chapters. Who was counting each of these occurrences to make sure they are used the same number of times? The Qur’ān was revealed over time, it was not someone who wrote it at a desk pondering over where to place each word. If you go to a library and pick up a book, what are the chances that the word “day” is scattered throughout the book 365 times? The Qur’ān combines all of these rare occurrences is evidence that the Qur’ān has been designed by God and not the work of man. The Qur’ān highlights this point by stating that God has enumerated all things in numbers (Qur’ān 72:28).

Do you know what is the Quran?

Who is Muhammad, the Messenger of Allah, the Prophet of Islam? 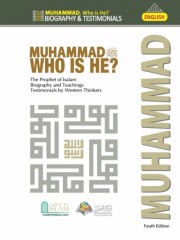 Muhammad (PBUH) Who is He?