Anything given as a means of getting closer to Allah, the Most High, in ways other than what is obligatory.

From this definition, gifts and other things given with the intention of fostering love are excluded; they are not classified as alms which are specially defined by some rulings of the Shari’ah.

The Ruling of Voluntary Charity

Voluntary charity is recommended at all times, especially when needed, and we have been encouraged to give charity in the book of Allah and the traditions of His Messenger ﷺ. For example:

“Who is he that will lend to Allah a goodly loan so that He may multiply it to him many times?”

- On the authority of Abu Hurairah (may Allah be pleased with him) who said: The Messenger of Allah ﷺ said:

“Whoever spends in charity the equivalent of a date from pure earnings- and Allah accepts only that which is pure- Allah will accept it with his right hand and nurture it for its owner as any of you nurtures his foal –and a foal is the offspring of a horse – until it becomes like a mountain.”

- The Prophet ﷺ counted the person who gives alms in secret to be among the seven that Allah will cover with His shade on the day when there will be no shade except His shade: “...and a man that gives alms and makes this secret to the extent that his left hand knows not what his right has spent.”

- On the authority of Ka’b ibn ‘Ujrah (may Allah be pleased with him), the Prophet ﷺ said:

a-Purification of intention; one gives charity seeking Allah’s Face alone, not for purposes of showing-off or seeking a reputation with the people of being generous.

b-Desisting from reminding (people) of your generosity and from inflicting them with injury; Allah says:

“O you who believe! Do not render in vain your sadaqah (charity) by reminders of your generosity or by (inflicting) injury.”

a- It is encouraged for a Muslim to give alms to those he is not obliged to cater for among his relatives who need it e.g. paternal and maternal uncles, a wife giving to her poor husband etc. This is better than giving to people other than them. Allah the Most High says:

“Indeed giving alms to the needy is rewarded and to a relative, a double reward is taken – one for giving alms and the other for strengthening the bond of kinship.”

b- Selecting from his wealth that which is lawful, pure and that which he desires for himself. Allah, the Most High, says:

“By no means shall you attain Al-Birr (piety, righteousness, etc.) unless you spend (in Allah’s cause) of that which you love.”

c- Secrecy while giving it: because of that being closer to having a pure intention, and farther from showing-off or seeking a good reputation, just as it is also more honourable for the poor person. Allah says:

“If you disclose your Sadaqah, it is well, but if you conceal it and give it to the poor, that is better for you”

When a benefit is expected by giving alms in the open e.g. to serve as an example and a way to encourage those present to do the same, it is then encouraged to give the alms in this way; but a Muslim must be aware of his intention and monitor it.

d- The alms are to be given from what one can afford, no matter how small. The Prophet ﷺ said:

“Fear and protect yourselves from hell, even with half of a date.”

Firstly: Benefits accruing to the individual

1- Purification for the soul. Allah, The Most High, says:

“Take sadaqah (alms) from their wealth in order to purify them and sanctify them with it.”

2- Following the example of our leader, Muhammad ﷺ. Indeed, part of his noble manners was being open-handed and generous, and he would give as someone who did not fear poverty. He also used to say to Bilal:

“Spend O Bilal, and fear not penury[ Penury: poverty] from the Owner of the Throne.”

3- Allah replaces for the giver whatever he spends, while He will raise the status of his soul. Allah, the Most High, said regarding this:

“And whatever you spend of anything in Allah’s cause, he will replace it.”

4- Purification of wealth from the misdeeds of selling: On the authority of Qais ibn Abu Gharazah (may Allah be pleased with him): “During the time of the Prophet ﷺ, we used to be called As-Samasirah [ As-Samasirah: is used to mean traders].

The Messenger of Allah ﷺ passed by us and called us by a better name than that and said:

‘O you traders, indeed erroneous speech and swearing do accompany trade, so neutralize [ To neutralise, it is an order to mix; the Prophet ordered them to mix the sins with giving alms so that the alms would expiate for any accidental false speech etc. that may occur during selling.]it by giving alms.”

5- Being rewarded and having one’s sins expiated. The Prophet ﷺ said:

“Whoever gives in charity the equivalent of a date from pure earnings– and Allah accepts only that which is pure- Allah will accept it from him with his right hand and nurture it for his owner as any of you would nurture a foal, until it becomes like a mountain.”

6- A Muslim benefitting from his continuous alms after his death. On the authority of Abu Hurairah (may Allah be pleased with him) that the Prophet ﷺ said:

“Whenever a man dies his deeds are cut from him, except these three: a continuous charity, beneficial knowledge that is being benefited from, and a pious child that continues to pray for him.”

7- Charity is a reason for the increase and prosperity of wealth, for it is a manifestation of gratitude to Allah, the Giver. This is because a person who is grateful to Allah is promised an increase in blessings.

“And (remember) when your Lord proclaimed, ‘If you are grateful, I will surely give you more (of My Blessings); but if you deny (My favors), indeed, My punishment is severe.”

Secondly: Benefits accruing to the society

1- Voluntary alms complement the function of Zakah in the society.

2- Engendering solidarity, cooperation, stability and love in the Muslim society.

Other Types Of Zakat 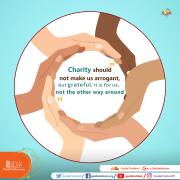 People to whom Zakat is paid and how it is paid