There are some things we might call ‘universals’ because just about everybody as far as we know would agree on them. In fact, these ideas are so basic they are part of what makes us human, and if someone didn’t agree to it we’d probably think they were mad. For example, the statement “part of something is less than the whole” is a universal idea. It’s common to all humans, that’s why we call it ‘common’ sense. It’s so obvious it doesn’t need explaining. Agree with me so far? OK. Here is another...’something doesn’t come from nothing’. And how about ‘order doesn’t spontaneously arise from chaos’?

What is there in the totality of human experience that would lead us to believe that something comes from nothing or that order just spontaneously arises from chaos?

Well that’s right! Nothing. Actually what we consistently experience is that where there is order, form and systems, something has imposed the order, the form and systems. The more complex and ordered the systems, the more functional the form, the greater the level of intelligence behind it.

Let’s take an example of something most of us have and use on a regular basis: a mobile phone. Your mobile phone is composed of a few basic elements. Plastic, glass, silicon for the chip, and some precious metals. Plastic comes from oil, and glass and silicon from sand. So basically, what you are holding in your hand is oil and sand.

Now, what if I told you that I was walking along in the desert of Arabia (where there is lots of oil and sand) and picked up a mobile phone which I found just lying there... a product of billions of years of random events? The wind blew, the sun shone, the rain fell, lightning struck, the oil bubbled, the camel trod and after millions and millions of years the mobile phone formed itself. And naturally I pick it up, push the call button... “Hi, Mom!”

Is there a chance that this could have randomly formed itself through natural processes? However remotely possible, most of us would simply not accept this as a reasonable explanation.

Why then, would we accept such an explanation for our universe and the life within it?

THE TEST OF UNIVERSALITY 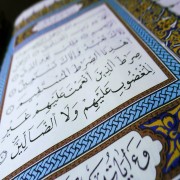 The Quran itself gives a sort of falsification test